Posted on April 23, 2012 by Jennifer Flueckiger 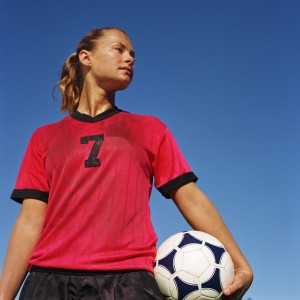 Recently I came across some research that asked nearly 900 soccer players (aged 11 to 18) at a top-level competitive tournament in the U.S. about their motivations, attitudes and behaviours in relation to the game.  The results challenge a number of myths about girls and girl’s football.

The study found there is no difference between girls and boys in their desire to be competitive. Both girls and boys see winning and scoring as important parts of their game. Ninety four percent of girls (the same percentage as boys) answered that they play football because they want to be competitive.  It’s clearly an important part of why they play.

However, the research raised the possibility that girls might define “being competitive” differently than boys.  In their answer to the question “How important is winning when playing soccer?”, 80 % of the boys indicated winning was “important” or “very important;” while 61 % of the girls answered in this way. On the other hand, when asked how important playing fairly was to them, 72 %of the girls answered “important” or “very important,” while only 48 % of the boys answered the same.

The study found that girls and boys play for the same reasons: to have fun, to improve their game, and to be with friends.

If you look at the numbers of girls who play football in US and Australia you can see that girls play almost as much as boys. Girls love to play football in Scotland too. So why do only 2% of women play? What is going on here?

This study said something about how parents and coaches help shape what children see as acceptable activities and their attitudes about competition. Children are very interested in the differences between girls and boys. I’ve read about other studies that show that it is not until around age 5 that they understand that their gender is fixed. They think that activities, clothing and hair style define gender and not biology. They don’t understand that if a boy wears pink, he is still a boy.

They listen to adults and peers to get information about what are “girl” things and what are “boy” things. It follows then that what they like and what they like because it further identifies them to a specific gender becomes blurred. On the flip side, they will start to “dislike” activities or things they understand as belonging to the “other side”, as it is often described.

It may be hard for us to believe but there will always be a number of children of both genders who are not at all interested in football.  However, there may be a large number of girls who are put off from even thinking about playing because parents, coaches, teachers and other children label football a “boy’s game”. The study outlines that coaches and parents have a large role in helping both girls and boys understand the positives they can get out of playing football.

Bad sportsmanship and other bad behaviour at the top-level of game grab headlines and discourage some parents from encouraging their children to play football. However, this study found that the vast majority of players at youth level in the States had healthy attitudes towards competition and that bad sportsmanship was not a widespread problem.

The only study I could find about youth players’ competitiveness or sportsmanship in the UK supported this study’s findings males and older players were more likely than females to accept cheating and gamesmanship. It however did not shed any light on whether bad sportsmanship was problem in the UK in youth football. This is important as there is something cultural in the attitudes and behaviours in relation to football. At the very least this study can show us that it is possible to have competitive youth games without unhealthy levels of competition.

Of the young players who said they felt pressure to be competitive, as many cited their parents (25%) as source of this pressure, as they did coaches (26%). One in four mentioned both. Parents, as well as coaches, have a large part to play in player’s attitudes and behaviour and also whether or not competition in sport becomes a negative pressure for children.

This study also looked at the impact of a coach’s motivational techniques, attitudes and behaviors on the players.  There were differences in what the players said about the attitudes of female and male coaches.

Female coaches are also less likely to make negative comments, yell if mistakes are made and apply undue pressure. However, female coaches are just as likely as male coaches to “help me bring out the best in myself”, “help me be a good sport” and “motive me to do my best rather than to do better than others”.

In terms of coaching techniques, there were no significant differences between the ways in which boys and girls answered questions about how their coaches motivate them. According to the young players in this study, the most motivating tools used by coaches are positive feedback (76 %), pep talks (76 %) and humour (71 %), while the least effective tool is strict rules (35 %).

As always, I’d love to hear what you think about the issues above.

For further information about this study or to read the paper see the following: